There’s a long lacrosse tradition at Brentwood (N.Y.) High School on Long Island, including its status as alma mater for National Lacrosse Hall of Famer Frank Urso, one of the sport’s all-time greats.

But in recent years, Brentwood’s boys’ and girls’ programs haven’t been as competitive as they would like. In fact, the girls’ program has had a glaring need for new gear and equipment that hasn’t been updated in many years. Sticks, goggles, and gloves were among the priority items.

Hearing that news recently, Lacrosse Unlimited, an equipment supplier headquartered on Long Island, stepped into the breach. Partnering with both USA Lacrosse and Long Island Metro Lacrosse Foundation for funding assistance, the company donated $15,000 worth of equipment, which arrived on campus last week.

The Brentwood athletics director, coaching staff members, the varsity and JV players, and the school superintendent were all on hand to greet the arrival of the special delivery.

“Their faces were all lit up,” said Rob Rimmer, creative director at Lacrosse Unlimited. “Everyone was very grateful.” 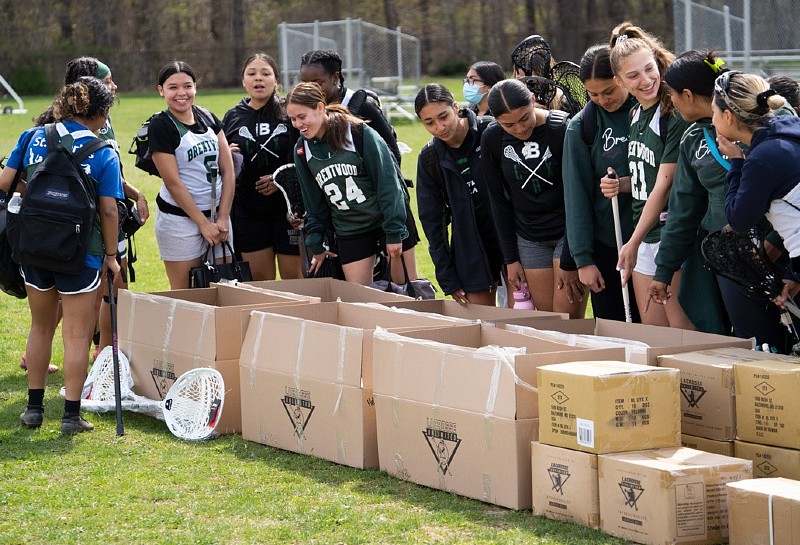 In addition to the gratitude of the players and coaches, appreciation has come from many other corners, including the coordinator of athletics for the Brentwood Union Free School District, who thanked both USA Lacrosse and Lacrosse Unlimited for providing the new equipment.

“Your generosity is bigger than you can ever imagine,” Francisco R. Herrera said. “Your commitment to our girls has given every girl a sense of belonging, and the notion that there are people in the world that care about them.”

Herrera also noted that there’s newfound enthusiasm across the Brentwood lacrosse community. There was enough equipment for both BHS’ varsity and JV teams, as well as four girls’ middle school teams in the district.

“The buzz has been traveling so positively after this donation,” Herrera said. “Our middle school girls have been given the word that their outdated sticks will be replaced with brand new ones. And our varsity program coincidently won its very next game after the donation.  I am sure the enthusiasm of the new equipment had everything to do with that win. Our program is in such a better place.”

Harry Jacobs, regional director at USA Lacrosse, played an important role in getting all the parties connected. He noted the importance of the collaboration in the success of this endeavor.

“We all made a difference in the life of each and every one of the Brentwood girls lacrosse players,” Jacobs said. “There were lots of people involved in doing something really good for kids. It was a great day for lacrosse.”

World Lacrosse Announces Schedule for U21 Men's Championship in Ireland